深夜的閃光 | 2021-06-05 23:02:35 | 巴幣 0 | 人氣 278
Hi, everyone. Did you like me think Marvel United that has a lot of Heroes we love but only 4 can play and players limited by 4 is not enough?
After getting the game from Kickstarter wave2 and playing several game, the game lacks of replayability for me. Even if there is so many expansions but the rule is easy and monotonous.
Assemble Heroes that is other option to help the game be more challenge and enjoy the more heroes can  play on the gameboard.
Here the Variant:
Before playing Assemble Heroes, you should prepare 3 dice that can be 6, 8 or 10. You can take 3 all the same or different with each other.
[需要中文版變體規則？ 請看

Settings:
Put the Villain meter on the center of table. Take 3 Villain dashboard and put them on the meter has Villain dashboard from bottom to top in any order.
Shuffle each one master plan deck and put them from the left to right. If Taskmaster is the top Villain, his master plan is on the left unlock position.
Taking 8 location tiles you choose around the Villain Dashboard. The top right is No.1 location and  put the remains in clockwise. Taking the thug and rescue tokens on the each location tile. 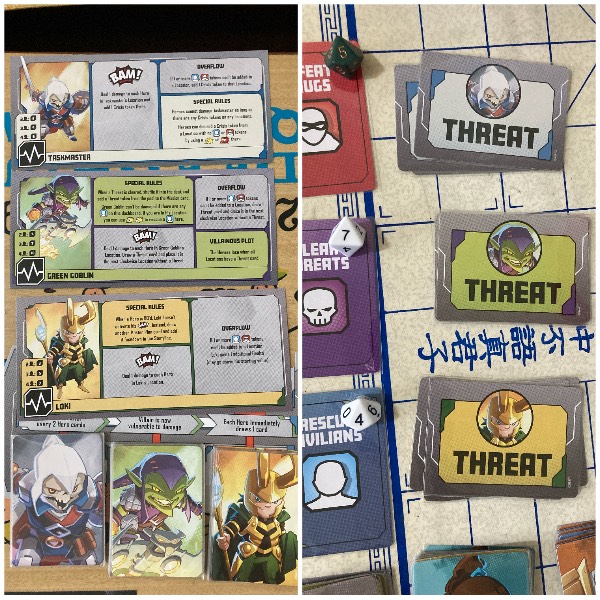 Shuffle the their Threat in each and put them as the Villain dashboard order near the 8 locations. If Taskmaster is the top Villain, his threat deck also is the top.
Finding the 3 mission cards. Flipping them back and setting them from top to bottom and close to the 3 threat deck.
Rolling your first die and keeping result on the top of the 1st mission card. Then Rolling the rest of dice and setting them on the top of the 2nd and 3rd card. The Results of dice present the goal to clear the missions.
If result is over 9, reroll please. 9 is the max result.
Check if the total results of 3 dice are more than the numbers of player. If not, take the minimize die and reroll until over the numbers of player. If you have 2 minimize results, reroll the 2 dice.
Threat cards on the location
Draw 1 from the 1st threat deck and faceup on the No.1 location. Then draw 1 from 2nd threat deck and put it bellow the 1st location, it's no. 2 location. And then draw 1 from 3rd deck and put it on the no.3 location. If the threat mission is 4 or more to be cleared, back to the 1st threat deck and draw 1 from every threat deck and set them in clockwise on the locations.

If threat mission is 9 to be cleared, your 9th card will be placed on the 1st location. There is 2 threats need to be resolved. Clear the 1st one and to do the rest. Only in the beginning of the game has 2 threat cards on the same location.
The rest of threat cards set them aside and put them together. Don't shuffle them. Unless game effect, most of the rest of threat cards will not be used. Green Goblin,the Villain in the Spider man expansion, whose BAM can call the threat from the threat deck to the next location without threat card.
Villains starting location
According to the mission die result, it will be the Villain the starting location. Each location can contains 3 Villains. The 1st mission host is Taskmater and the result 9 of 1st mission card. Taskmaster appears on the Top right location. 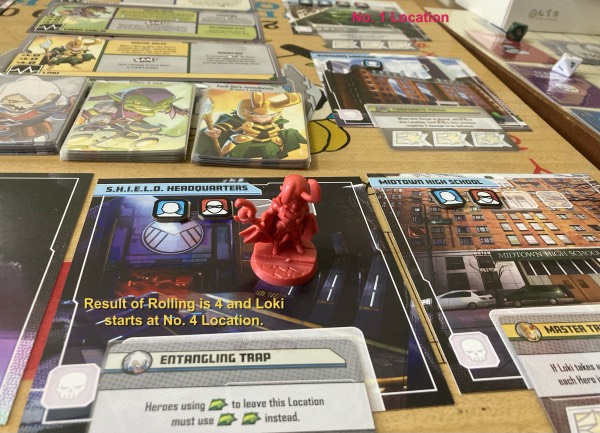 Team your heroes
Each player choose any 2 heroes. Pick up all Wild-1 and Wild 2 cards. Shuffle all wild 1 cards from every heroes as wild 1 deck. Make wild 2 deck like wild 1. 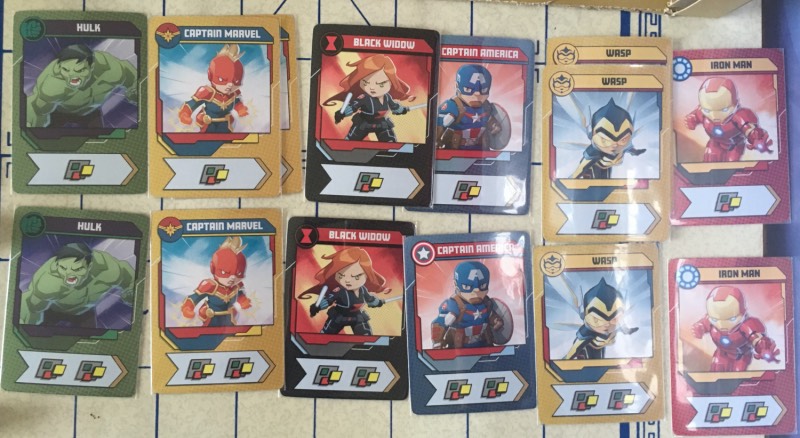 Each player shuffle their 2 hero cards and then draw 2 the same hero cards and the other different one. Shuffle the deck again.
Selecting one location from the max values of 3 mission cards without Villains in clockwise and move all heroes on that location. Super Heroes Landing!!

A player looks like a hero will be the starting player.


Turn Order
Draw 1 card from the left master plan deck and upright it on the 1st mission card closely. Mission one is the first story line of the game. Villain takes action, move, BAM, location effect, or take tokens from pool.
Player draw 1 card from the deck and play 1 card from hand next to the master card. When every 3rd player card play on one story line, the story line will temporally be end.（Hey, this is Volume One of mission1. we will see the story later. mission 2 story begins now.)
The next master card be draw and play on the next mission card. The next player keep going to play his/her card. However the player cannot use the last symbol in the last story line. Every symbol belongs to the their story line.
If all villains have played their card, to back the left master deck of the Villain. Go on the 1st story line. (Volume 2 is coming!)
Mission Complete
Collecting the tokens or defeat threat cards on locations to fit the values of the mission die is the only way to complete mission. Rescue or thug should be put on the corresponding mission card. Threat cards resolved that can be on threat mission card horizontally. 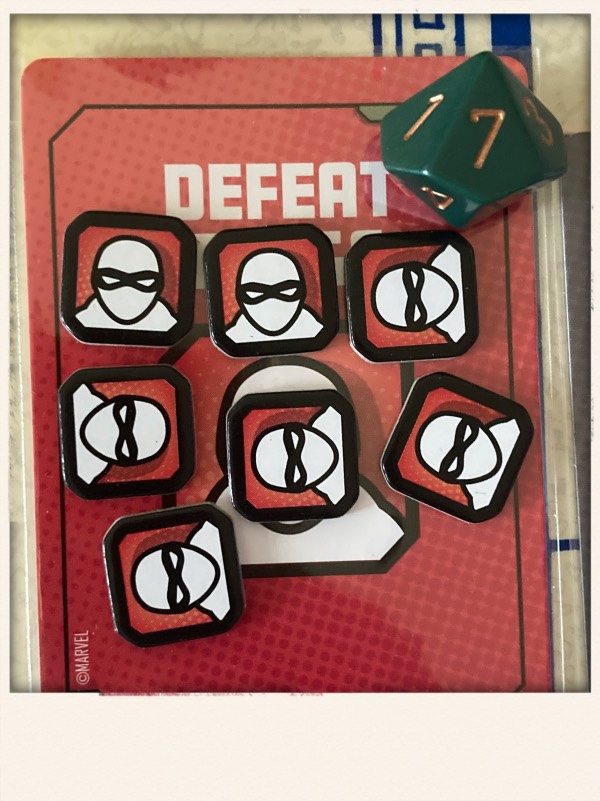 Saving enough citizen or defeating enough thugs so that you can put all tokens back the pool. (Heroes have much time to save the world.) Once a mission completed, remove the master deck on the corresponding villain. If necessary, move remaining master deck to right and performance the unlock. If the 1st mission is thugs and the host is Taskmaster, put all thug tokens back to pool and remove Taskmaster deck on the mission card. This is will stuck the Villain. Villain can't go anywhere. But still can be triggered its BAM.
Play a Hero
Just like the original rule each player draw 1 and play 1 card per turn. Only one hero that can be played his/her/its own card even if you have 2 heroes.  Performance action and effect. The extra token is a common resource for the team play. Hero damage followed by the original rule. However there are 2 or more heroes in the same location, the other player may take cover the only 1 damage for another hero and put 1 hand back to bottom of the deck.


Ｋ.O.
Just like the original rule no hand can take the damage. Hero immediately lay down the piece. And the Villain of the story line, his BAM again. While the player has at lay down heroes, she/he must select one lay down piece be placed back upright. During the draw step, the player draws 4 cards. then play 1 card and the rest of steps.


BAM Chains
If a Villain with BAM master card and move to a location where is already another Villain there, the already Villain will trigger their BAM first. The last one is the Villain moved in. Sometimes there are 2 Villains from top to bottom upon the dashboard order.

Rewards
Resolving a threat card that helps hero to gain 2 cards from Wild-1 deck. Draw from the bottom immediately and return cards to the player who own the hero.
Completing a mission or a villain HP is 0, players draw 2 cards from Wild-2 deck bottom. return cards to whom has the hero and faceup on the top of his/her deck. Players wouldn't draw any cards until wild deck run out. 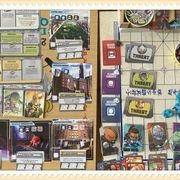 Top Down Bottom Up 看刀劍神域裡的ＡＩ發展 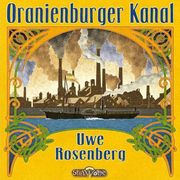 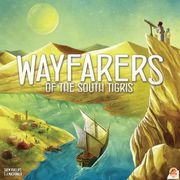 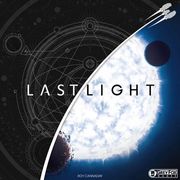 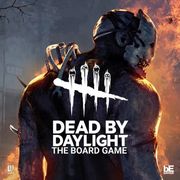 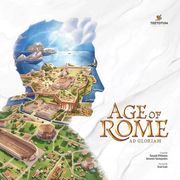 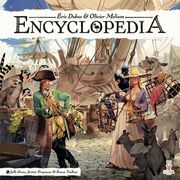 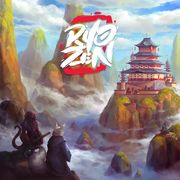 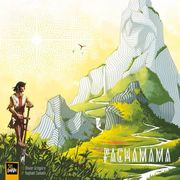 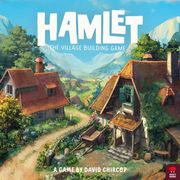 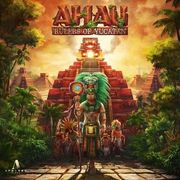 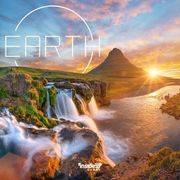 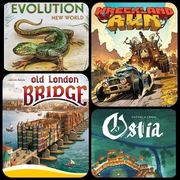 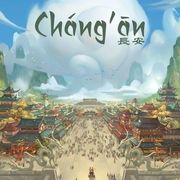 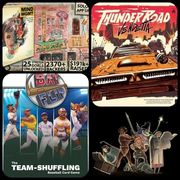 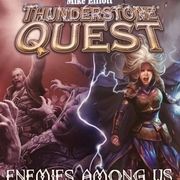 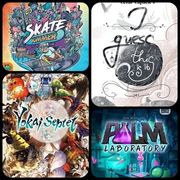 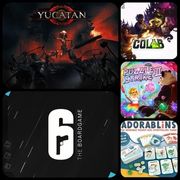 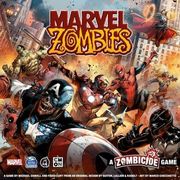 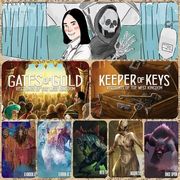